If you don't speak the alphabet soup language of Biochemistry but want to understand what we do,
try this video.

Here is a nice press release about a study we published in June 2019.
Thanks for writing this Dr. Jennifer Brown from UIHC Marketing & Communications! 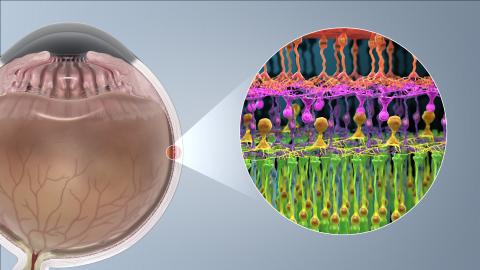 A new study in mice by University of Iowa researchers suggests it may be possible to regenerate critical nerve structures in the eye that are disrupted by genetic mutations even after these structures known as synapses have matured abnormally.

For lead study author, Sheila Baker, PhD, UI associate professor of biochemistry, and ophthalmology and visual sciences, the findings provide proof-of-principle that these synapses can be rescued.

“This has broader clinical implications because in the vision research community there is lot of excitement surrounding ongoing efforts to create gene or cell replacement strategies to cure blindness, but those approaches will rely on the eye’s innate ability to develop new synapses,” she says. “The resilience we observed in the mouse retina synapses gives me hope that someday we will be able to treat blindness in people of all ages.”

The study, which is published in Investigative Ophthalmology and Visual Science, focuses on photoreceptor synapses in the retina. These synapses, sometimes called the first visual synapse, translate light that enters the eye into the first nerve signal in a long relay of signals that the brain ultimately interprets as vision.

Baker’s team studied the structure of photoreceptor synapses in blind mice with a mutation in a gene called CACNA1F. The CACNA1F gene codes for a calcium channel that is required for normal synapse development. Humans with CACNA1F mutations have a visual disorder called congenital stationary synaptic disease.

The team used a method to add working versions of the CACNA1F gene to newborn mouse photoreceptors and were able to control when the genes became active by using a drug as an ‘on-switch’. Then they closely examined the anatomy of the synapses to determine how well they were rescued when the gene was turned on at different ages. As expected, restoring the gene in immature retinas allowed the synapses to develop normally. Much more surprising and exciting was the finding that waiting until the retina was older to restore healthy CACNA1F also rescued the structure of the synapse.

“We saw an anatomical correction of the synapses back to normal and some animals gained enough vision to navigate a maze,” says Baker, who also is a member of the Iowa Neuroscience Institute. “We really didn’t know if it would be possible to reverse the damage once past the developmental window when synapse formation is normally complete, but now we see it is, so we are motivated to work on developing ways to fix the CACNA1F gene in humans.”

In addition to Baker, the UI team included Joseph Laird, Sarah Gardner, Ariel Kopel, Vasily Kerov, and Amy Lee. The research was funded in part by grants from the National Eye Institute.